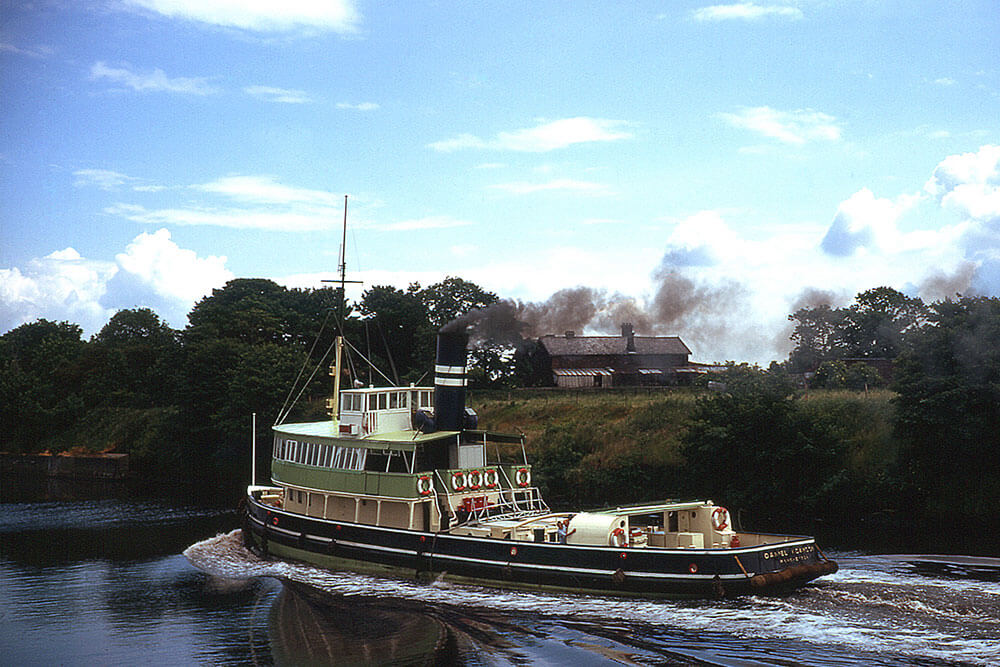 The Daniel Adamson is a remarkable survivor from the steam age and a most unusual vessel. A small but incredibly powerful canal tug, she was built to tow long strings of barges laden with goods from the inland towns of Cheshire and the Potteries to the great seaport of Liverpool. She made her appearance on the Mersey at a time when old-fashioned sailing ships still jostled for space on the Liverpool waterfront with the great steamships and ocean liners of the Edwardian era.

She was built at what is now the Cammell Laird shipyard in Birkenhead in 1903, and named the 'Ralph Brocklebank' after a director of the London and North Western Railway which owned the SURCC  (Shropshire Union Railways & Canal Company) for which she was built. Her launch came just a month before the family firm of Laird’s Birkenhead Iron Works merged with Charles Cammell & Co of Sheffield to create one of the most famous names in shipbuilding the world over.

Although she was built on Merseyside, the Ralph Brocklebank was one of three tugs ordered that decade by the  SURCC, whose fleet of vessels was the largest in the country. Canals were the arteries of the country, a vital transport link connecting inland industrial and agricultural areas to the open sea and the markets beyond, and the tugs played a small but vital role in this trading network.

Although she was built on Merseyside, the Ralph Brocklebank was one of three tugs ordered that decade by the Shropshire Union Railways & Canal Company (SURCC), whose fleet of vessels was the largest in the country. Canals were the arteries of the country, a vital transport link connecting inland industrial and agricultural areas to the open sea and the markets beyond, and the tugs played a small but vital role in this trading network.

In these early days, the Ralph Brocklebank also carried passengers between Ellesmere Port and Liverpool, a service that continued until 1915. During the First World War, she also had a short stint working for the Royal Navy as an unarmed patrol boat around the Liverpool coastal area.

After the war, however, canal traffic declined as companies turned to road and rail to move their goods. The SURCC stopped canal carrying in 1921 and started selling off its fleet. The Ralph Brocklebank was about to begin a new and very different phase in its working life. 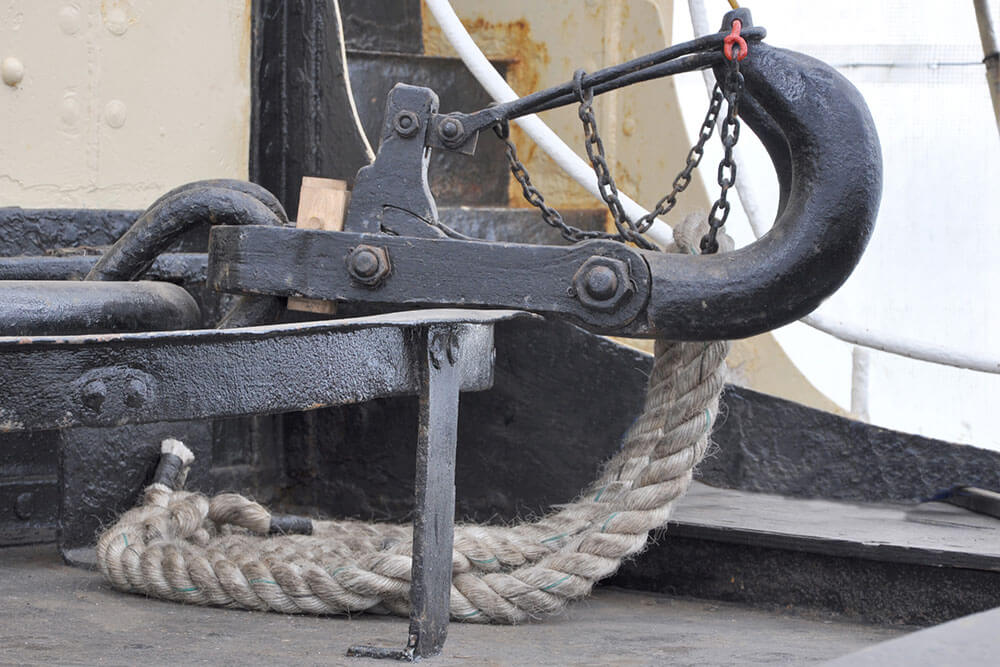 The Manchester Ship Canal had opened in 1894, the brainchild of a group of Manchester mill owners and businessmen led by an engineer and boilermaker from County Durham called Daniel Adamson. Manchester was the cotton capital of the world at this time, and creating its own dock system meant that the city could bypass the high taxes levied by the Port of Liverpool, and bring ocean-going cargo steamers the thirty-six miles inland to the heart of ‘Cottonopolis’, as Manchester was coined.

The ship canal was bucking the national trend, and the Ralph Brocklebank was one of six new tugs acquired by MSCC from the SURCC. She was purchased in 1922 for just over £3,000, and her black funnel acquired the Manchester Ship Canal Company’s characteristic two white bands. As well as her towing duties, she also started to carry passengers again between Manchester and the canal entrance at Eastham.

More significantly, the Ralph Brocklebank was also used to take visiting VIPs around Manchester’s famous inland docks and along the ship canal. From the late 1920s a succession of eminent visitors sailed on the Ralph Brocklebank, including King Fuad of Egypt, King Faisal of Iraq, King Amanullah of Afghanistan, and the Sultan of Zanzibar. 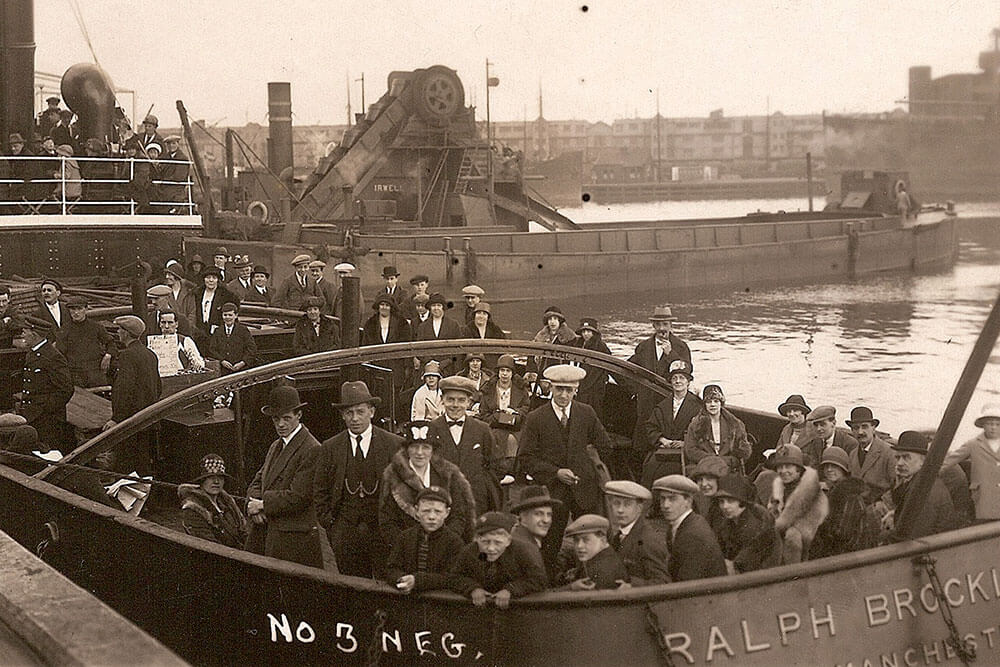 In 1936 the Ralph Brocklebank was chosen as the official director’s launch. Early that summer she was given a radical refit and her name changed to that of the ship canal’s founding father and first MSCC chairman, Daniel Adamson.

Her technical upgrade was a straightforward case of making her ‘fit for purpose’. The wheelhouse and bridge were raised and she acquired a new upper deck and two saloons, making her taller and more ‘top heavy’ than the other tugs. The story of the renovation of the interiors, however, is more intriguing. The directors had requested a ‘roomy and artistic effect’ and local companies were invited to come up with designs for the remodelling.

Furniture makers Waring & Gillow of Bold Street, Liverpool, were consulted about the interior design and decor. But in the end the contract went to rival Bold Street firm Heaton Tabb & Co. This company was a wholly owned subsidiary of the Belfast shipbuilders Harland & Wolff Ltd, and as such had experience of fitting out the interiors of some of the grandest Atlantic liners in the world.

The proposed new interiors had the languid lines and pastel colours of the early 20th century art nouveau style, in keeping with many of the popular liners of the day. However, when the refitted tug was revealed in May 1936, the Heaton Tabb interiors were startlingly different from the original proposals.

The art nouveau design was never created. Instead, the newly renovated Ralph Brocklebank boasted the clean bold lines, geometric patterns and block colours of the unapologetically modern Art Deco style. The interior of the tug was now a miniature version of one of the newer generation of Atlantic liners, such as the stylish French ocean liner SS Normandie or Liverpool’s own magnificent Cunard-White Star flagship RMS Queen Mary. Somewhere along the line there had been a sudden change of heart, and thoroughly modern Art Deco had well and truly supplanted the pleasing but somewhat passé art nouveau style.

After a trial run to Runcorn in the middle of May 1936, the Ralph Brocklebank was officially renamed the Daniel Adamson. Visitors were now protected from the elements and in the snug but stylish lower saloon perhaps even able to imagine themselves in the cocktail bar of a glamorous ocean liner.

WW2 brought economic and social changes, and steam power was being slowly superseded by diesel. The stalwart tug sailed on in her dual role through the post-war years, entertaining more distinguished guests, including military leades, princes and premiers, but by the 1960s her towing duties became less frequent.

Though still in demand for hospitality, she was now seen as a valued tradition rather than an integral part of the working life of the ship canal. The Daniel Adamson’s decline also mirrored the ship canal’s demise: the new generation of supertankers could not easily or quickly reach Manchester Docks. Once containerisation became widespread, Manchester Docks could not compete and they closed in 1982.

The octogenarian tug was nearing the end of her era. In late 1984 the MSCC decided to withdraw her from service. She overwintered at Runcorn, her future uncertain until arrangements were made to move her to Ellesmere Port Boat Museum. Eventually, on 5th March 1986, the MSCC tug Victory towed the venerable Daniel Adamson to Ellesmere Port, the very place where she had started her working life eighty-three years before.